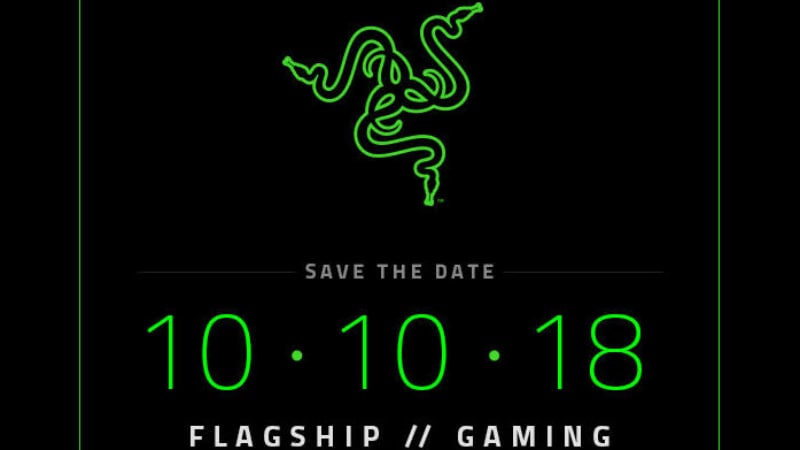 Gaming brand Razer has announced that it will be unveiling its second-generation flagship smartphone at a launch event slated for October 10. Successor to last year’s Razer Phone does not have an official name yet and the teaser just mentions the phrase “Flagship // Gaming”, not revealing any other details around the upcoming Razer-branded smartphone. Coincidentally or deliberately, Google is hosting its Pixel range refresh event just one day before this launch, that is, on October 9 in New York.

While pricing of the upcoming second-gen Razer Phone is not known, its predecessor started at $699 (roughly Rs. 50,800) in the US. It is likely that the gaming company might give it the same price tag, however we shall have to wait till next month to get clarity of pricing and availability details. The invites were sent out to media outlets, as reported by Engadget.

This development comes right after Razer had confirmed in a financial call that its next flagship would arrive soon. The company had also expressed interest in extending its PC services to the mobile division. These include services like Razer Game Store and the zGold wallet and rewards platform that could soon make their way to the mobile platform with the second-gen Razer Phone. Other features could include the Snapdragon 845 SoC and a 120Hz display. The company could also launch certain accessories to go with the phone, however this is based on pure speculation. Let’s recap the specifications of last year’s Razer Phone.

The Razer Phone sports a 5.72-inch IGZO LCD UltraMotion display with a QHD (1440×2560 pixels) resolution and a 120Hz refresh rate. It is powered by a Qualcomm Snapdragon 835 SoC, coupled with 8GB of RAM and 64GB of inbuilt storage. Storage on the smartphone is expandable via microSD card (up to 2TB).

In terms of optics, the Razer Phone bears two 12-megapixel camera sensors on the back with f/1.75 and f/2.6 aperture on each of the two, coupled with a dual-tone LED flash. On the front, the handset features an 8-megapixel fixed-focus camera sensor with f/2.0 aperture. Connectivity options include 4G LTE, Wi-Fi 802.11ac, Bluetooth v4.2, and NFC. There is a 4,000mAh battery under the hood with support for Qualcomm Quick Charge 4+.