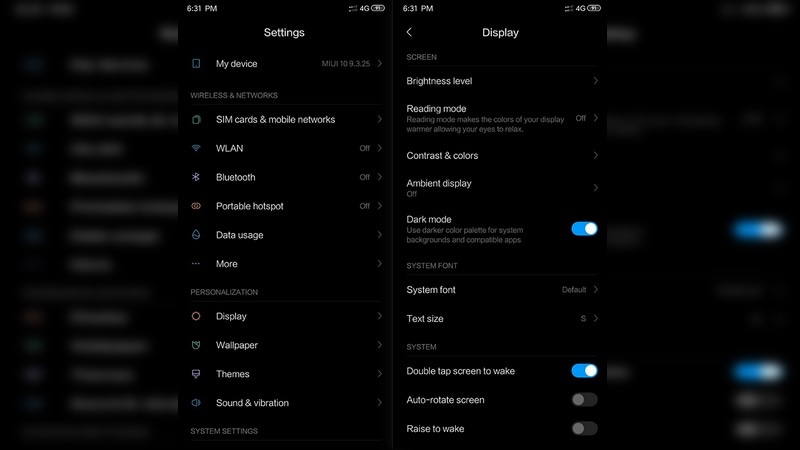 The Poco F1 recently received the MIUI 9.3.21 global beta update, which brought the Game Turbo mode and also fixed the issue of overlapping items in the notifications shade. The device has now reportedly started receiving the MIUI 9.3.25 global beta update that brings the highly demanded system-wide dark mode. The Poco F1’s system-wide dark mode applies a dark shade to the volume controls, notification shade, settings page, and a host of compatible system apps. The MIUI 9.3.25 beta build for the Poco F1 is said to not be a closed channel update, and is reportedly being rolled out widely to all testers as an open beta update.

The Poco F1 is not the only smartphone from Xiaomi’s stable that is receiving dark mode. The Redmi Note 5 Pro has also started receiving the MIUI 10 9.3.25 closed beta update that brings the dark mode as well as MIUI notification style changes and a few tweaks to the Settings section. As for the Poco F1, the Android Pie-based MIUI 9.3.25 global beta update does the job of introducing the dark mode, but there is no word on the other changes it brings.

The latest MIUI global beta update for the Poco F1 is 1.8GB in size and its rollout was spotted by XDA-developers based on a tip from a developer. As for the dark mode itself, its description on the Poco F1 says, “use darker colour palette for system backgrounds and compatible apps.” The Dark Mode toggle can be enabled on the Poco F1 by navigating to the ‘Display’ sub-section in the Settings menu.

Activating the dark mode reportedly applies a dark theme to the volume controls, notifications shade, the ‘Recents’ menu, Settings section, and a host of system apps such as the calculator, contacts, gallery, phone, and notes among others. There is no word as to when the system-wide dark mode for the Poco F1 will arrive via a stable MIUI update.