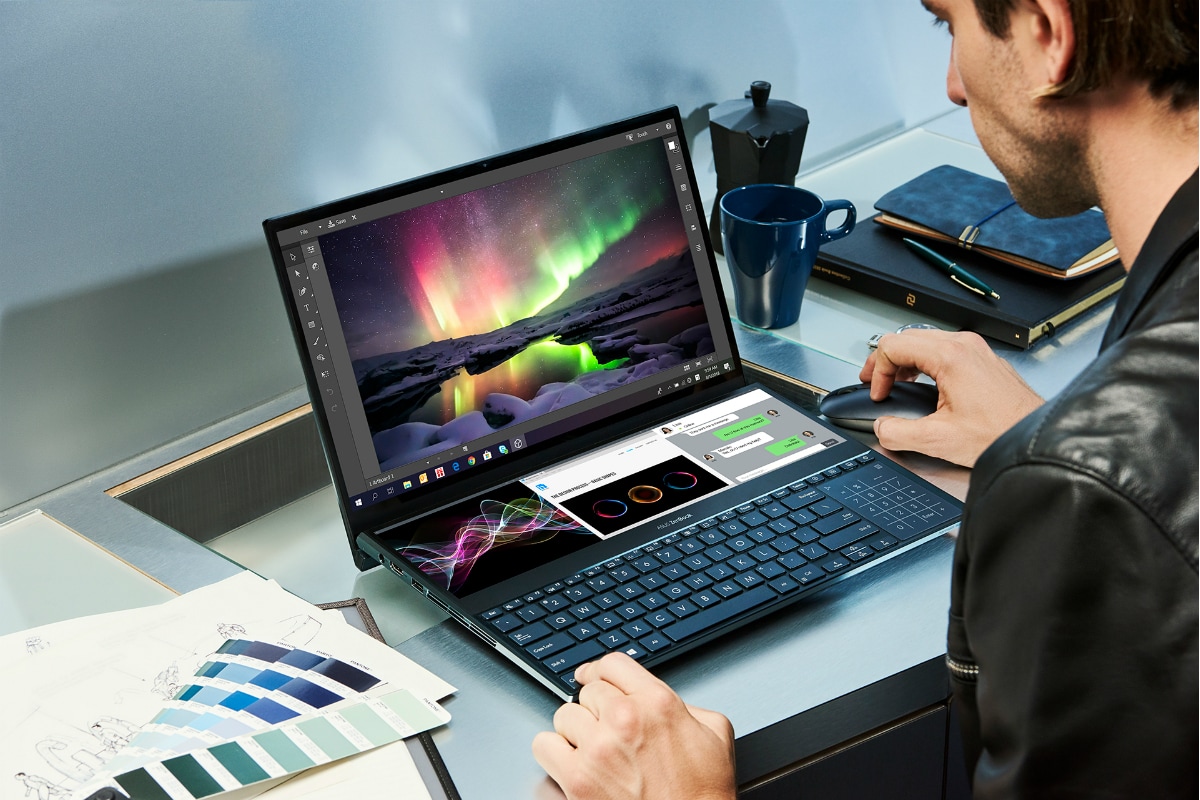 Almost a year after unveiling the ZenBook Pro models with a ScreenPad at last year’s Computex, Asus at its Computex 2019 keynote on Monday unveiled the ZenBook Pro Duo with a ScreenPad Plus secondary display. The full-width secondary OLED touchscreen panel is designed to enable seamless interactions with the main display of the notebook. The Taiwanese giant has also brought the ZenBook Duo as the streamlined version of the top-end notebook model with a smaller ScreenPad Plus panel. The company also announced the ZenScreen Touch as its latest portable monitor with a 15.6-inch display with 10-point touch support and built-in battery.

The flagship ZenBook Pro Duo (UX581) model is powered by up to ninth-generation Intel Core i9 CPU, paired with gaming-grade Nvidia GeForce RTX 2060 GPU and up to 32GB of RAM. The notebook also comes with 1TB PCIe 3.0 x4 SSD. Asus has provided a “frameless” 4K UHD (3840×2160 pixels) OLED NanoEdge display that supports touch inputs and 100 percent DCI-P3 colour space, HDR support, and 89 percent screen-to-body ratio. There is also a 4K (3840×1100 pixels) ScreenPad Plus secondary display along with an Asus NumberPad dual-function touchpad.

Getting deeper into the 4K ScreenPad Plus panel, the secondary touchscreen has a 32:9 aspect ratio. It sits just above the laptop keyboard to provide users with an enlarged visual workspace.

Asus claims that the ScreenPad Plus can be used as any standard second display in Windows to display visual content. Also, there is a preloaded ScreenXpert control software to enable multiscreen window and app management. The proprietary software brings controls such as App Switcher, ViewMax, and App Navigator. Users can additionally use the Task Group function to open multiple tasks with a single touch.

For an enhanced experience, discrete apps, toolbars, and menus can be dragged on to the ScreenPad Plus display to reduce clutter on the main screen. Tools such as video previews, timeline controls, and code windows can also be opened specifically on the secondary display. All this reminds us of the ScreenPad debuted on the last year ZenBook Pro models. Furthermore, the users can draw their creations on the ScreenPad Plus using the bundled stylus or any other active status.

If you aren’t convinced by the ScreenPad Plus, the Asus ZenBook Pro Duo also has a new NumberPad, which is an LED-backed numeric keyboard integrated within the touchpad. The notebook also comes with Amazon Alexa voice support along with sporting a dedicated light bar at the front that illuminates just as the illuminated ring available on Amazon Echo speakers.

On the connectivity front, the Asus ZenBook Pro Duo comes with a Thunderbolt 3-supported USB Type-C port and includes Wi-Fi 6 with Gig+ (802.11ax).

Alongside the new notebooks, Asus at its Computex keynote also unveiled the ZenScreen Touch (MB16AMT) portable monitor that is touted to be of 900 grams along with 9mm of thickness. The new 15.6-inch monitor supports 10-point touch inputs and works with swipe, scroll, drag, and pinch gestures. Asus has also provided support for its ZenScreen Touch app that lets users mirror their apps on the monitor directly from an Android phone.

The ZenScreen Touch has a hybrid-signal USB Type-C and Type-A connectivity and includes a Micro-HDMI port to display content from a range of devices, including laptops, smartphones, cameras, and game consoles. Besides, there is a 7,800mAh built-in battery.